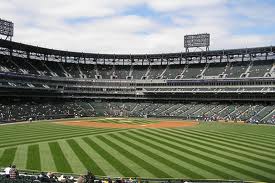 As the current major league baseball season winds down, you still have a chance to take in a few hours of America’s pastime.  Chicago baseball teams run the gamut of good, bad, popular and fan starved.  Four miles north of downtown is Wrigley Field, home of the Chicago Cubs.  Three miles south of downtown Chicago, the up and coming White Sox toil in a beautiful ballpark of their own.  Crowds for the Sox lately are often less than 10,000, and parking is abundant.   You can also get right to the stadium on the Red Line elevated train.  This season, they have traded most of their tradable players, stockpiling prospects.  In a couple of years, they will be probably be a great team.  As a result, tickets start at just $7.00.  You read that right, $7.00.  On Wednesdays, good, substantial hot dogs, fresh off the grill, are just $1.00.  This is for a major league team in a stadium with all the bells and whistles as the others.  The largest jumbotron in baseball is at the park.  Fireworks light the sky after home runs.  It is a great experience, but if a tree fell there, it may or not make a sound.

The other local team is the Chicago Cubs.  Long the laughing stock of American sports, the team won their first World Series Championship in 108 years last October.  This season has been up and down, but things are looking up as this season’s playoffs are about to begin.  The Chicago Cubs home, Wrigley Field is like baseball heaven.  Babe Ruth pointed to center field there nearly a century ago, predicting the home run he was just about to hit.  Ivy covers the outfield walls.  The scoreboard is manually operated.  Seats are close to the field.  The only thing to try to avoid is getting a seat behind a pole.  It’s an old old place, built well before the cantilever theory that modern day stadiums use.  Still, it’s as good as it gets when you are in the mood for a ball game.