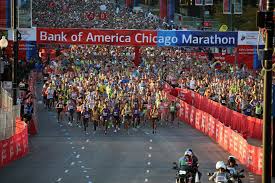 The 40th running of the Chicago Marathon is in the books.

The winner of the Mens group was Galen Rupp.  He is the first American to win the Chicago Marathon since 2002, when it was won by Khalid Khannouchi.  He completed the endurance run in 2:09.  Previously, Rupp won a Bronze medal in the Brazil Olympics.  The winner of the female race was Ethiopian star Florence Kipligat.  She completed the scenic course in 2:18.

Beautiful Sunday for the Chicago Marathon

On a beautiful, slightly warm October Sunday, the Chicago Marathon runners enjoyed the sights, sounds and smells of this beautiful city for 26.2 glorious miles.  Temperatures ranged from about 60 f at the start and 72 late in race.  The Chicago marathon is one of the six World Major Marathons, along with  Boston, New York, Berlin, London and Tokyo.  It is an IAAF Gold Label race.

Starting and finishing in Chicago’s “front yard”, Grant Park, the Chicago Marathon visits some of the best neighborhoods in Chicago.  From The Loop, to Old Town (Second City Comedy Club), Lincoln Park (Lincoln Park Zoo) and back south, it’s quite the way to take a Chicago tour.  Chicago is a great sports city, and the run goes near Wrigley Field (Chicago Cubs) on the north, The United Center (Chicago Blackhawks) on the west side and the home of the Chicago White Sox on the south side.  The race / run ends near Soldier Field, home of the Chicago Bears.

Chicago continues to be a great destination for any world traveler.  Runners from all 50 states and 100 countries took part in this years event.

In other sports news…

In other sports news, the Washington Nationals scored five runs in the bottom of the eighth inning last night, and went on the beat the Chicago Cubs 6-3.  Games three and four of the best of five series will be played in Chicago at Wrigley Field tomorrow (10/9) and Tuesday.  The series is currently tied at one game a piece. 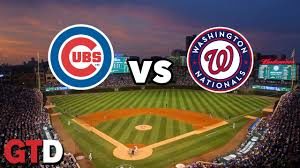