The Magnificent mile is in the section of Michigan Avenue, between the Chicago River and The Drake Hotel is Chicago’s main shopping street.  The name Magnificent mile was coined by Real estate developer Arthur Rubloff  back in the 1940s.  It bridges the area between The Loop business district and the Gold Coast residential neighborhood.  The magnificent mile is Chicago’s version of  Fifth Ave. in New York, Rodeo Drive in Beverly Hills, the Champs d’ Elysee in Paris.  The more expensive stores, like Gucci and Louis Vuitton, are on the north end of the magnificent mile.  More affordable stores and several restaurants are further south.  Michael Jordan’s Steakhouse and The Purple Pig are closest to the Chicago River.  The Purple Pig features ears, feet, tails, cheeks and more unusual menu items, which are  prepared in a gourmet way. The purple pig  is usually very busy, but a great area of the magnificent mile.  The Wrigley Building and Tribune Tower are also on the mile.

Only a few buildings did not burn down in Chicago during the Great Chicago Fire.  Two of them are the Water Tower and Pumping Station.  They are built out of Limestone, while the other buildings pre 1871 were made from wood.  While you are walking along the magnificent mile, you can go into these historic structures.  Go inside of the pumping station to see theater featuring live performances.  The Lookingglass Theater is owned by former Friends star, David Schwimmer, along with some old college friends. 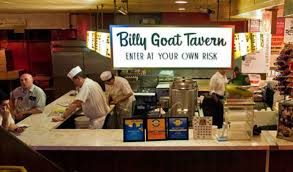 A hidden landmark, actually located below the magnificent mile, is the Billy Goat Tavern.  John and Jim Belushi used to hang out here.  This is where John got the idea for the “cheeburger cheeburger” skits on SNL.  To get here, go down the stairs that are located in front of the Wrigley Building.  It’s on Hubbard St.