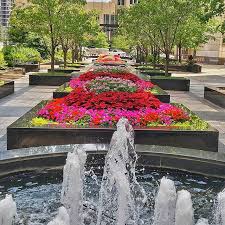 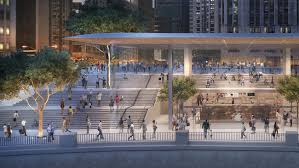 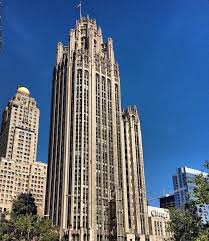 The Magnificent Mile became even more magnificent on October 21.  A new, state of the art $30,000,000 Chicago Apple Store is attempting to bridge the bridge over the Chicago River.  This will go a long way to connecting the beautiful shopping area north of the river to the rapidly improving stretch of Michigan Avenue that is south of it.  A new Nutella Restaurant, Garrett Popcorn and Nando’s Peri Peri Chicken restaurant then take visitors and locals alike, right into Millennium Park.

The first Apple flagship store in Chicago opened 4 blocks north of the new one, fourteen years ago.  This new location, sitting along the Chicago River, right near the Shoreline Sightseeing dock is not only larger, but it is an architectural gem.  This Chicago Apple Store is not only about selling things, it is also about providing a beautiful and functional meeting area, and a place to learn about technology and explore products.

Chicago has long been a mecca for shoppers.  The Magnificent Mile, Gold Coast and even State St. in the loop feature something for everybody.  The Chicago Apple Store joins fellow newcomers Under Armour and Verizon in opening giant stores downtown.

About four blocks from the north end of the Magnificent Mile are the Water Tower and Pumping Station buildings.  Built just two years before the Great Chicago Fire, they pumped water to the homes and businesses nearby.  You can go inside and check them out while you are out shopping.

THIS JUST IN:  Condé Nast, the pre-eminent source for info about all things Travel has just announced the Chicago is now considered to be the number one city to visit in America!  A recent poll showed that folks are now catching on to just how fun, safe, clean, tasty and wonderful this city is.  Come on down and check it out!